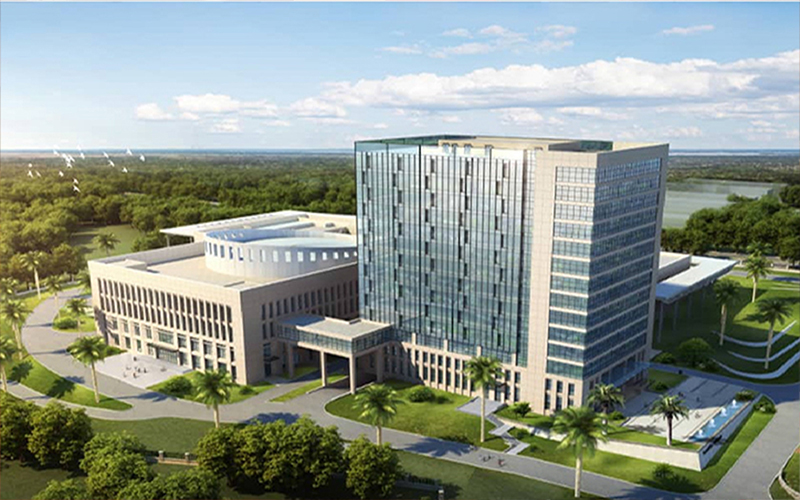 The New National Assembly  complex that will be built  and entirely equipped by the Government of the Peoples Republic of China to the tune  of 54.5 billion CFA Frs, is a “gift without compensation”

Sino- Cameroon friendly relations took an upward swing on Thursday 12 december 2019 following the laying of the foundation stone of a new National Assembly edifice at the very site of the Glass House in Ngoa Ekelle, Yaounde. The ceremony placed under the auspices of the President of the Republic, His Excellency Paul Biya, was chaired by House Speaker, the

The New National Assembly complex that will be built and entirely equipped by the Government of the Peoples Republic of China to the tune of 54.5 billion CFA Frs, is a “gift without compensation” Characterized by solemnity and great fanfare, the event was attended by a plethora of high profile personalities namely Senators, Members of Government, the Judiciary and the diplomatic corps especially the Chinese Ambassador to Cameroon, H.E. Wang Yingwa. Music, cultural display and four speeches punctuated the highly publicized ceremony. In his address, the Rt. Hon. Cavaye paid glowing tributes to the Head of State on behalf of fellow Members of the National Assembly, for the “beautiful gift” of the architectural jewel.

He saw in the new building President Paul Biya’s acknowledgment of the illustrious role the National Assembly has played these last four decades in shaping Cameroon’s political life. “It is here (National Assembly) on a certain 6 November 1982 that the man of the New Deal and Great Opportunities took his first steps as Head of State”. The National Assembly the Speaker said was a high place where those who seek political office come to receive the final anointing from the people and the nation’s blessings.

He noted that the new building was the very first major projects piloted by the Head of State’s Seven year mandate of greater opportunities. The Rt. Hon. Cavaye exalted the Sino-Cameroon friendship describing China as a friend indeed who has always stood by Cameroon even when it went through tough times in its history. He proted President Paul Biya who went ahead on a visit to China on 31 August 2018 praised pekin for multiple gifts assistance and support that she has granted to Cameroon. The speaker expressed the wish that more florets spirit to further fan the flames of Sino-Cameroon friendship. Earlier, Hon. Datouo Theodore, Deputy Speaker and Chairperson of the follow up Committee of the project recalled that the path that led to this great day was strewn with many obstacles which have been cleared now. The new complex, he said, resulted from President Biya’s vision to modernize Cameroon’s institutions to enable them meet modern challenges. The Chinese Ambassador to Cameroon who had preceded the Speaker to the podium pledged that the edifice will handed over to the National Assembly in 2023, complete and fully equipped. H.E. Wang Yingwu said China chose the best building company in order to offer Cameroon a befitting building worth of Sino- Cameroon rich relations. He expressed the hope that Cameroonian partners to the project will put in their best so that the expected results will be achieved.

The Deputy General Manager of the Beijing Urban Construction group (BUCG) that has been chosen to build the new palace promised to use local materials, colours and work in close collaboration with Cameroonian partners. He called on the Cameroon Government to provide his company the support it needs in order to produce a beautiful and befitting building in 2023.

The ceremony ended with the symbolic laying of the foundation stone by President Biya’s representative and his suite amidst a horde of Cameramen and women jostling each other to immortalize the event.